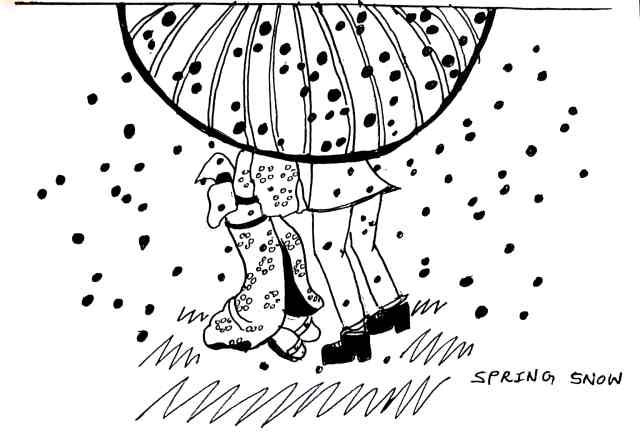 I have a love-hate kind of relationship with Snow. Even though it affects me in a way, I can’t stop thinking about it. There is something fascinating about Snow. The thought that it’s the frozen state of water gives a sense of satisfaction and relief that something could be controlled. As if the world has stopped and we can do things without worrying about the flow of time. It is weird to think like that, but sometimes all you need is a little bit of imagination and hope to see things with a different perspective.

The illustration that I have tried to draw is the book cover of one of the most beautiful books ever written- Spring Snow by Yukio Mishima. The beauty of this cover and the odd sense of relief it gives me is inexplicable, just like the Snow.

“I wonder if the snow loves the trees and fields, that it kisses them so gently? And then it covers them up snug, you know, with a white quilt; and perhaps it says, “Go to sleep, darlings, till the summer comes again.“”